It was a fleeting visit to Paris, lasting only a half day.
I was there to see my old friend and to pick up a Vanessa Bruno leather tote bag which she kept it for me since March. The bag was adorned with studs, not with sequins and very hard to come by in UK.

The people who read my past entries know that I and Paris is not a match made in heaven.
I deleted them eventually because I wanted to move forward. Otherwise, it would keep  me bitter and I never wanted that, so I reasoned.
You see, some experience is better forgotten, like stepping on a dog sh*t. Just scrape it off at the nearest curbstone and walk away.

My day trip to Paris kicked off not so auspiciously.
I was kept awake until early hours by my neighbour’s huskie which decided to be a cry baby, barking non-stop. Why tonight?! I have to SLEEP!
It was like Chinese water torture. In the end, I scooped up my bedding and evacuated to the day bed in the living room. I was too annoyed to go back to a full sleep by then, only managed to grab less than a few hours of dozing off.  *SIGH*

At St.Pancras International, I bought a large latte and slumped on the stool by the escalator. All other seatings were taken up by families with suitcases and fold-alls.
The departure lounge was very busy. I was looking at scenery, feeling dazed and tired. Oh dear, what a way to start a day… 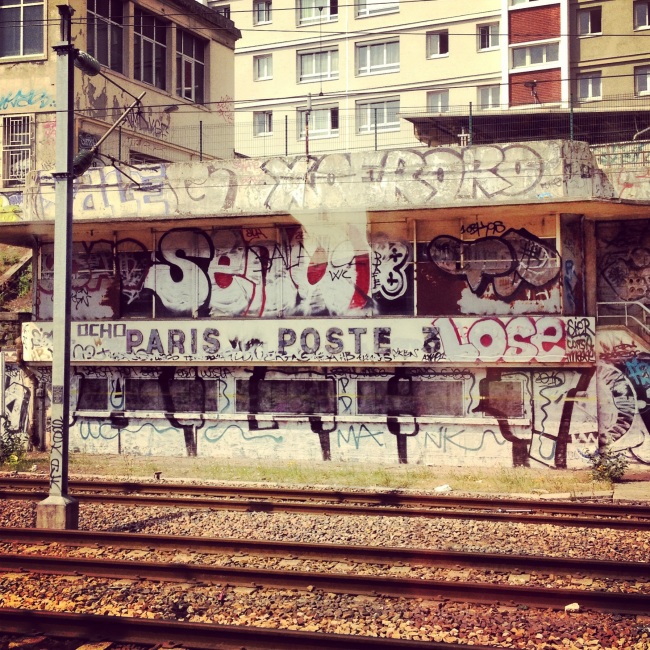 The passengers started to manoeuvre towards the exit and I followed the suit. 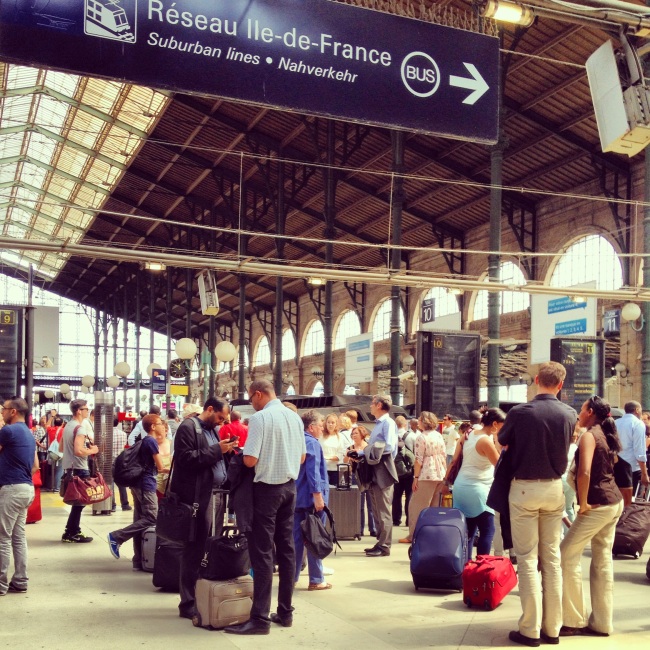 It was packed with the people carrying luggage.
The exodus for vacances has started already? 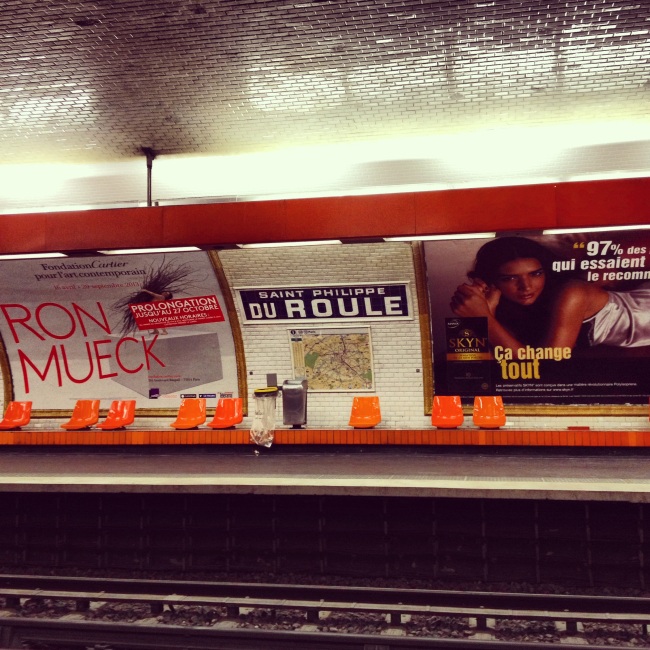 I arrived there too early and had to wait for half an hour on the platform.
Why does Paris Metro have a smell of urine everywhere? And not very well-lit either. I infinitely prefer our London counterpart…

She arrived shortly after 12:30 and we walked to Kiyomizu on rue Saint Philippe du Roule.
I had been craving for Unagi no Kabayaki – Grilled eel – for sometimes. So I was determined to eat it when I was with her.
Here comes my lunch!

Unaju came in a bento box, accompanied by a bowl of miso soup and a small dish of Japanese pickles.

The eel tasted fine but the rice let me down.
For any Japanese rice dish, it is imperative that the rice is STICKY. Otherwise, the sauce which seeps into the rice disintegrates and separates them and spoils the whole “Fluffy rice with flavour”experience.
What a shame…

After lunch, we moved on to Marais district. 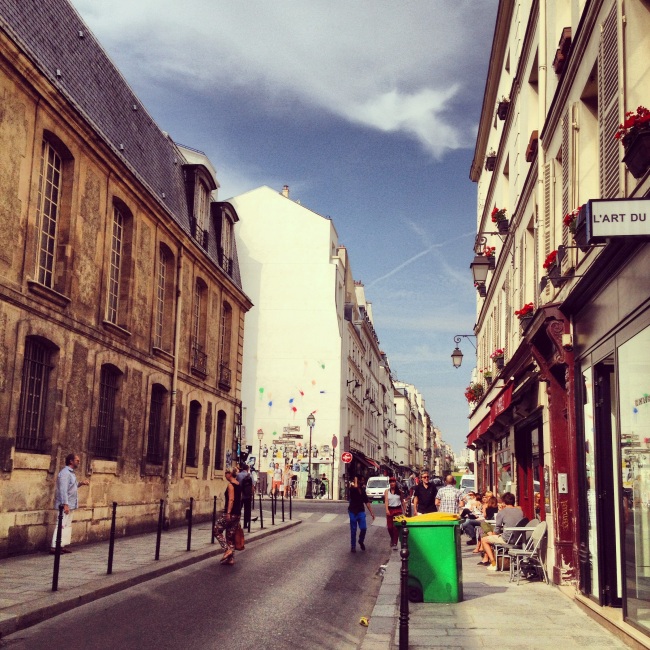 We were so thankful that it wasn’t as hot as the recent days in Paris.
The wind was light and the sun wasn’t as relentless.
The first shop we visited was Merci on Boulevard Beaumarchais… 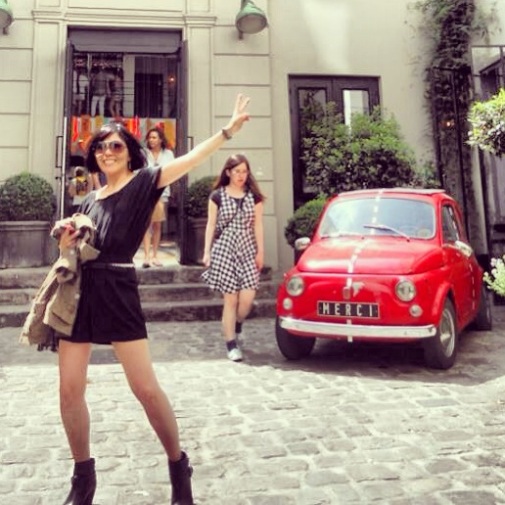 Here I am! Go away fatigue!! 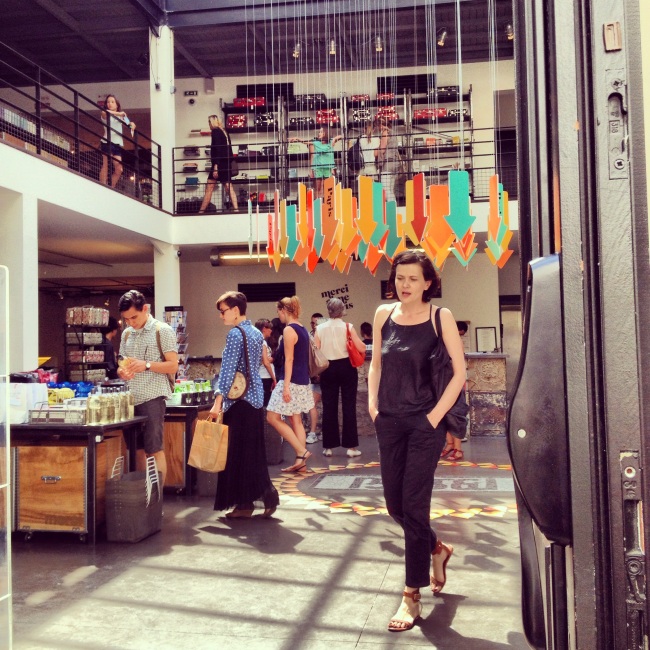 A life style shop? Is it called nowadays?
They were selling well-selected items which wouldn’t break a bank. 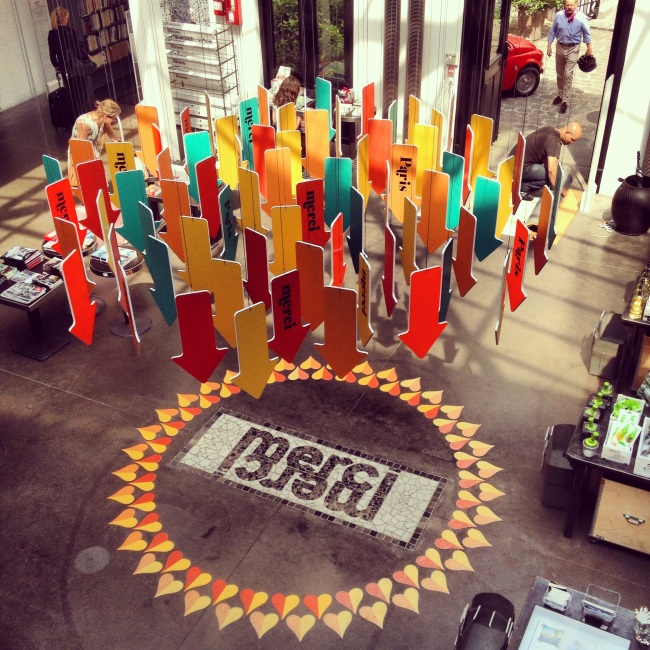 Then, we moved on to Ostentatoire on rue de Torenne…

The shop was filled with works by local up & coming jewellery designers.
They were cute  and some of them were very original too.

It was on a biscuit tin.
By the way, I never see Chihuahuas in Paris. How strange.
When I took Mr.B to Paris years ago, we were stopped constantly by the passerby who wanted to know what he was!

Maybe it was to do with nearing to the end of summer sale and also an imminent vanaces season, the shop floor seemed to be rather sparse.
Rather crest fallen, we retreated to an adjacent cafe for refreshment.
It’s too hot for coffee! So, we ordered a large bottle of sparkling water.
Let’s have our reunion picture!

She is the only reason I keep on coming back to Paris. She is a gem.

Invigorated by cold water, we headed to Meet on rue Elzevir. 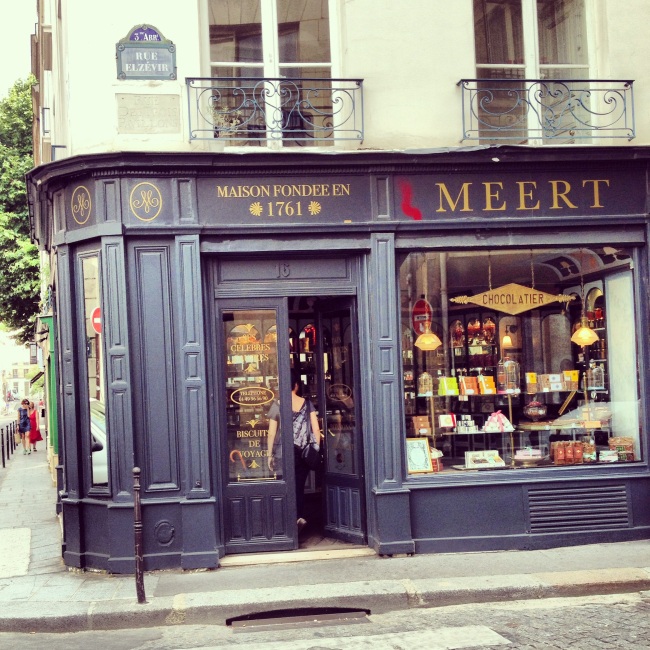 They produce the sweets which originally  conceived in Lille in the 18th century.
Their Gaufre (Waffle) is her husband’s favourite. So she wanted to take it home.

Sadly, Hubbie was not keen on sweets much. So, I went home, empty-handed. 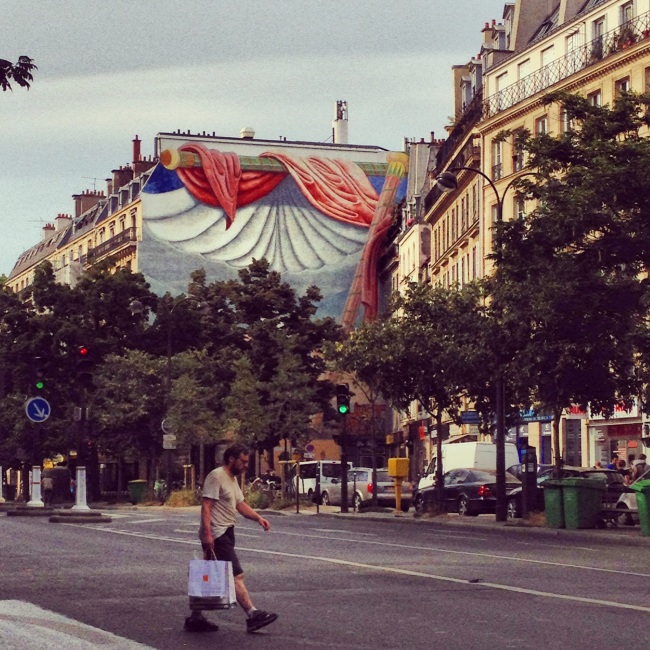 After negotiating through those narrow streets of Marais, it was refreshing to stroll on a much wider pavement.

I know this character but not its name. Does anyone know?

We bade farewell at the concourse of Gare du Nord.
It was great to see each other again. Even though English Channel separates us, we shall carry on nourishing our friendship through Facebook.

Once the train came out the Channel Tunnel, the order of announcement switched back to English followed by French which made me feel very at home…

My return journey was riddled with minor unpleasantnesses though.
I encountered a haughty and arrogant French woman as well as a grumpy and rude Indian woman at the departure lounge. Plus, some one near my seat loudly snored and broke wind constantly throughout my journey. Oh, it was just another nail in the coffin…

P.S. This is the bag I brought back from Paris. Cool huh?

2 thoughts on “Never Get On”