The tranquil expanse of Grey’s Inn Fields greets me as I walk down Theobold’s Road.
For a long time, I believed that the garden was closed to the public.
Every time I passed there, on foot or on bus, I never saw a living soul except daffodils in the spring or mournful looking plane trees in the winter.
So I assumed the place was out-of-bounds to general public… 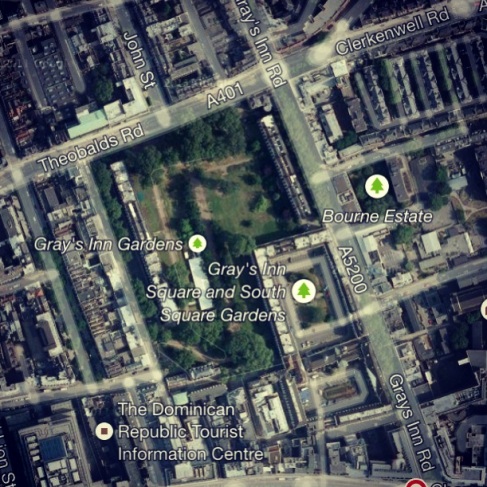 Then, I googled about the garden and discovered that they were open to public!
The opening time is rather brief, between 12:00 – 14:30, Monday to Friday. Still, I CAN go in.
Once, I’ve been given a green light from my surgeon, I shall visit the garden and let you know how I find it.

At the junction with Grey’s Inn Road, Clerkenwell Road starts and it dips gradually towards Farringdon Road.
When will the road blocks around Farringdon be removed? It must be to do with the Crossrail project.
Every night after the London rush hour dies down, the area becomes full of workmen in identical orange overalls with reflective strips. As some of you know, I studied architecture. And the sight of men working in construction sites excites me (kind of). I do like to see humans working against the elements, let me put it this way. I find it heroic.

Anyway, I carry on sauntering along Clerkenwell Road for a short while and turn left into Aylesbury Street.
In the background, a spire of St James’s Church towers over Clerkenwell Green…

I love the fact that London is full of these charming squares with a villagy atmosphere if I care to look for it.

Open fields or woods which distinguished the boundaries between parishes have long gone as the city grew.
Yet, those churches which are dotted all over London are discreet backbones of the communities as a magnet to pull the people around it.

Seeing the church on the left, I walk up Sekforde Street.
On this street, there is a pub I have been intrigued for a quite sometimes…

Sekforde Arms.
The reviews of this water hole are a mixed bag – 50/50 positive & negative.
For example, the food doesn’t sound like their strong point. However, all the reviewers praise the pub for not following the trend and refusing to turn itself to another gastro pub or smarting up for yuppies (aka tossers).

Oh, I wish Hubbie was with me.
I would have gone inside if I were not alone. I am not a timid kind (far from it).
However, I am not comfortable with the idea of walking into a pub alone – I am ok with a bar but not a pub.

When I mentioned about the pub to Hubbie a while ago, he told me that he had been there already.
“Oh, it’s just an ordinary pub. Nothing special”, he replied.
But darling, all I want is a traditional pub where they have a dart board on the wall and a roaring fireplace in the winter! The pubs with small windows are endangered species in modern London. And I feel a certain nostalgia for it.
Therefore, I shall persuade Hubbie to accompany me in near future…