My beloved Bramley – a jacket with a sumptuous collar – is finished!
To be precise, it was actually finished last Monday. 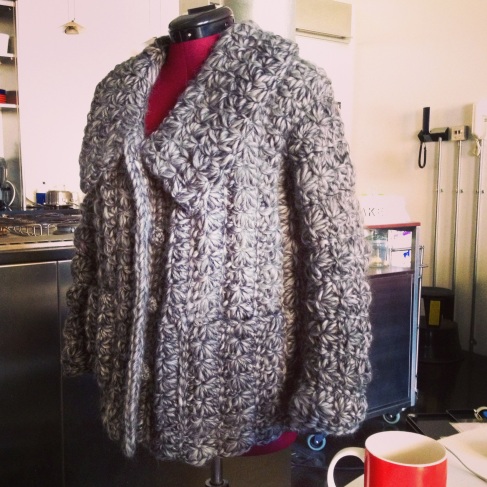 I am loving everything about this jacket.
The colour, the shape, the collar which also becomes a snood, the pockets…etc
It feels priceless when the time & effort I’ve invested in bears fruit like “Bramley”…

On Monday night, Hubbie came back from Italy with a pile of laundry, looking shattered like the crumpled linen shirt he was wearing.
Next morning, he left his case open on the plan chest, everything, minus his laptop, for all the world to see.

One thing I can’t bear is too much clutter in my sight.
I think I inherited this trait from my late father. He was an architect and had his own atelier next to our house. I still remember how tidy the studio was. Even pencils were arranged in a neat row. He put away things not only beautifully but also precisely. I always marvelled at his ability to fish out the exact document he was after amongst numerous drawers.
By comparison, my mother has a knack for cluttering a whole house.
Without an exaggeration, she spends 50% of her lifetime looking for things she mislays. Like a little tornado sweeping and sprinkling things in its path, she just enters rooms and makes such a clutter which still makes me crazy when I visit her in Japan.
I think my parents were perfect yin & yang as a couple. Super tidy vs super clutter. They complimented each other. Oh well, maybe Hubbie & I are like that too.

Anyway, I was sorting out the mess and found a crumpled brown bag amongst them.
What did he bring back home?

Hmmm… What’s in here?
I took liberties and inspected it…

In it I found was a bag of colourful pasta, a packet of chive crackers and four amaretti biscuits!
How did they end up being in Hubbie’s luggage?
You see, he is not that sort of guy. No Nigel Slater or Jamie Oliver. It’s soooo not him.
When he got home, I asked him about the mystery.
It turned out that the Italian production company he hired for the shoot wanted to give me a goodie bag  because I had to be alone in London during the weekend. Oh how nice of them!
Hubbie & I finished the amaretti biscuits with cups of tea in no time.

For the chive cracker, I shall get some nice cheese.
About the pasta, what should I do? Tomato sauce or cream sauce?
Get some Parmesan anyway and think about it later…

By the way, this was how Mr.B behaved while Hubbie was away… 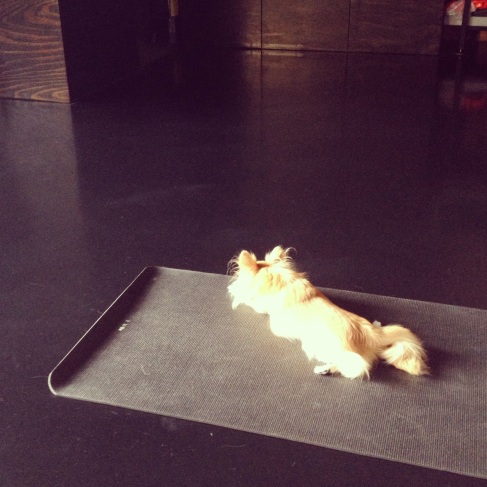 I finally managed to taste that curious green garlic bulb lookalike by the cashier at Maison Bertaux…
How did I find it?…
It was GREAT!
I should have tried it sooner.

The appearance was rather deceptive. 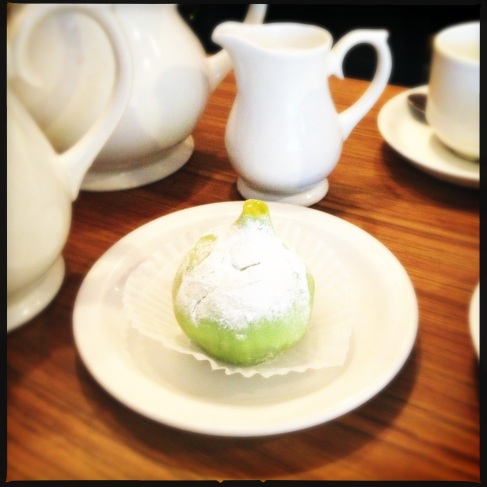 Not at all self-explanatory like the rest of their offerings.
A green “bulb”, dusted with powder sugar and nestled in a cupcake case.

There was a slight pang of disappointment when I found no actual fig inside.

However, the chocolate truffle filling was exquisite.
The right ratio of bitterness vs sweetness made this rich cake moreish. Despite its generous serving size, I did not feel queasy after polishing it off.
It was a hidden gem I was overlooking for a long time.
And their marzipan, what a pucker! The almond paste was divine.
What best describes the magic of this cake… Oh yes, it reminded me the famed Mozartkugel!
Ahhhh, I haven’t eaten them for years. I must hunt it down. Does Fortnum & Mason sell them? Or may be Harrods?

It was time to go home.
I glanced up and found a cockerel up in the air.

Oh, I didn’t notice you. How long have you been up there?

Maison Bertaux, you are a beacon of light in this chaotic city.
I can’t love you enough…

Well, I should walk home so I won’t get pudgy…

I was reading a two weeks old the Guardian Saturday food supplement in a bath – the bath with two large mugs of Epsom salt – what a bliss!
A long soak soothes my hardworking hands after hours of knitting. Oh my poor hands, how they were caned!

I was testing a new pattern and very keen to see the result.
However, after labouring for a few hours, it turned out not so successful. I was crestfallen and my hands were rather achy by then. Contemplated if I should pack up for a day then decided against it. Let’s not end a day’s effort in a sour note, I thought.
Whereupon I undid the part which wasn’t right and started all over again…

While floating in the bath, I came across an article by Henry Dimbleby…

Watermelon soda! Sounds so pretty!!
I just walked past a Turkish grocery shop the other day and saw enormous watermelons on a display.
How many people will be fed with that? I marvelled.
If it was juiced, it would serve a troop of guests, wouldn’t it?
However, sieving a whole gigantic watermelon sounds like a proper muscle-aching task though…

This weekend, Hubbie was in Turin, Italy, art directing a photo shoot.
So Mr. B and I were alone in London.
After Hubbie had left on Friday, a sudden urge grabbed me – I wanted a change!
The urge was so strong and urgent. Next moment, I was on the phone, asking my hairstylist how soon I could have an appointment.

Came Saturday morning and I was off to the hair salon off Bond Street.
Being installed in the seat by the window with a cape on, I explained to her that I wanted my hair short with highlight & low light.
We leafed through a style catalogue and chose the one with a longish fringe & choppy layers.
For highlighting, she reckoned it would take more than a few hours at least. My hair had been coloured with darker dye for a couple of years. Removing the colour deposit from the hair was a major job. So I popped out to get a bagel from Starbucks nearby in order to avoid embarrassing myself with a rumbling tummy while staying put in my seat.

After 4 hours in a hairdresser’s. chair, my makeover was complete…

What do you think?
I like it a lot. The photo is too dark to show the subtle tone changes in my hair. It wasn’t lightened drastically in one go as it could damage the hair beyond repair.
The stylist assured me that resting for a month would be an enough respite for the hair. So it could be lightened a little more if I wanted.
Hmmm… A tad more contrast won’t do any harm, I guess.