Best Mince Pie Award (by me)

As Christmas-related paraphernalia starts to invade every corner of our sights, especially November onward, so are mince pies which proliferate on the shelves of every bakery and coffee shop like a bunch of mushrooms in the autumn forests.
I gorge on them every winter not because I am very fond of them but because they are seasonal and the only time they are available is…NOW!

Firstly, I tried the one by Duchy of Cornwall, a brand created by Prince Charles. They were available in upmarket supermarkets and sold at £4.00 for a box of six. While their counterparts were priced at between £1.00 to £2.50, the Duchy’s pastry was significantly more expensive. Was their price tag justified? I am afraid not. The amount of the filling was much less than I expected and also it was consisted of too much sultana. The pastry casing was ok but also nothing remarkable. I don’t think I will buy them in future.
Another posh one I tried was from Fortnum & Mason. I tried it when I visited Somerset House with Hubbie. At their tea room within the Christmas Market, a pair of mince pies were offered with brandy butter. So I tried them with a mug of mulled cider. My verdict? Mmmm…, the shortbread crust was too thick and the filling was, how should I put it…, “gluey”. I really don’t think it will be worth parting with my precious £12.95 for six of this.
Then, I came across my winner by chance the other day.
I was sauntering around Shoreditch and decided to have a latte break at SCP on Curtain Road. There was a mince pie by St.John on display and I was intrigued by its rather rustic appearance. The top of the pastry was shiny and plump. I had had enough of the false pretence produced by de luxe brands by then. So I resolved to give another try to this artisan mince pie before going back to buying more down-to-earth cakes… 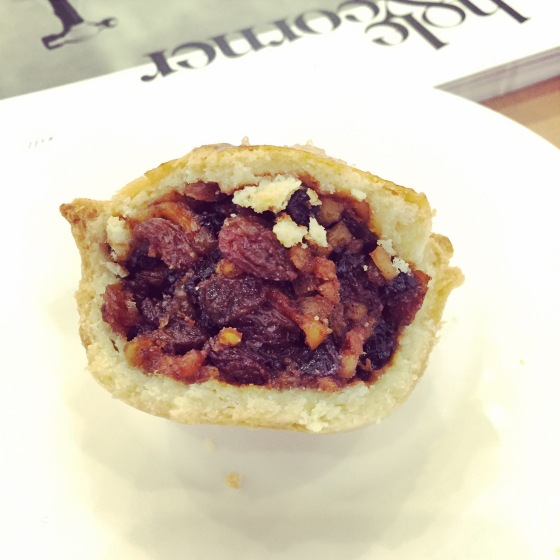 I had my first mouthful and I loved it! The filling was fresh and crunchy in a good way. I could feel the texture of the filling – apple, sultanas, currants, lemon, orange, almond mixed exquisitely with cinnamon and nutmeg. The pastry casing was robust enough to hold the generous filling without being too hard nor heavy. It was probably one of the best mince pies I had ever tasted!
If you happen to be around Shoreditch, Clerkenwell or Bermonsey this winter, pay a visit to St.John’s bakery and try their pastry. And let me know what you think…