For three consecutive nights, Bella disturbed my sleep. She scratched her pen incessantly and repeatedly during the early hours.

Bella, thank you for making me like a zombie… 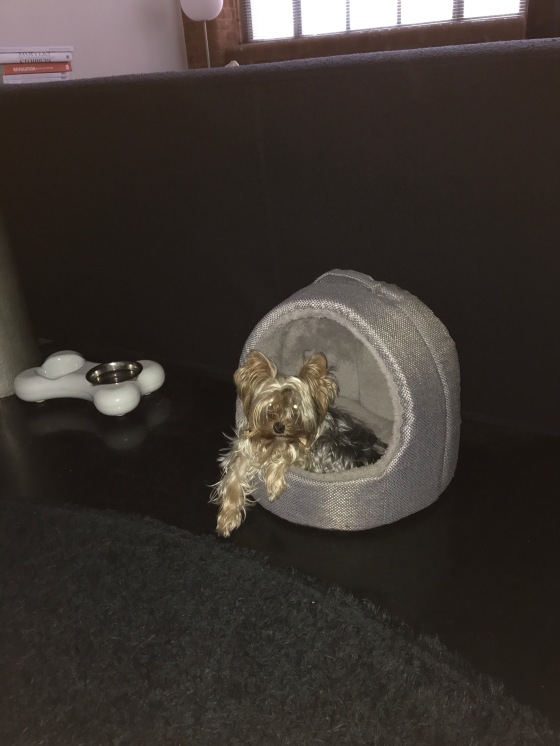 I let her out of her pen and observed what she was up to. She drank some water and stood there in the dark, looking back at me quizzically. ‘What did you want, Ben Ben?’ I picked her up and put her back in her bed. While lying in my bed and trying to get back to sleep, I was rather concerned because it was two straight nights she woke me up with the same antics. I may give Sandra (Bella’s breeder) a call if it persists, I thought as I dozed off. Then, I was woken up again with the noise only two hours later! This time, she just wanted to play. Oh for God’s sake!! This has to stop.

Mr.B never did anything like this. Unless he was ill, he never woke us up deliberately, Hubbie and I shook our heads as we gazed at her ruefully.

You do push the envelope, don’t you, you little minx?

Last night, I and Bella moved out of the main bedroom so we wouldn’t disturb Hubbie’s sleep. He was still undergoing his treatment for migraine, and the last thing I wanted was Bella’s antics triggering another headache attack.

Guess how many times she woke me up with her scratching?

Eight bl**dy times!! I stuffed my ears with ear plugs but it just didn’t work. Each time, I pretended not to notice, burying myself deep under a duvet. Then, the morning came, and I opened her pen to check if anything was wrong with her. She was absolutely fine and very happy to see me.

This sleeping arrangement will have to continue until I rectify her behaviour. I hope the rehabilitation won’t take too long as I miss my main bedroom!