No, it was not a real snowball but a pastry named as Schneeball (snowball), which was the most famous sweet in Rothenburg ob der Tauber. And I forgot to taste it!

I blame the heat wave, which was upon us throughout our road trip, for making me to miss out on this local delicacy. It was simply too hot to have any appetite for a fist-size fat-fried donut with sugar. Instead, I craved for ice cream (and beer).

Awww, Scheebälle! I want you now… 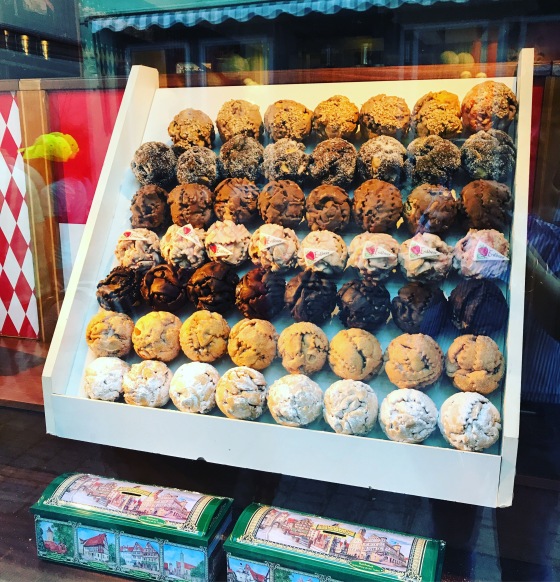 The history of these pastries is very long – they have been known to exist for at least 300 years. They were meant to be served on special occasions such as weddings, however, they became famed local delicacies and started to be available throughout the year.

The main ingredients are flour, eggs, sugar, butter, cream and plum schnapps. In order to form a distinctive shape of Schneeball, the dough is first rolled out and cut into even strips with a special rake-like cutter. The dough is cut as such that the top and bottom are left intact. Then, partially cut dough is loosely assembled and placed in a “Scheeballeneisen” – metal tongs with hollowed globes on the both ends. Finally, the scheeballeneisen with the dough inside is inserted into a deep-fryer, and voila, a golden brown Schneeball is born! Obviously, it has to resemble the real thing, therefore, it is dusted with confectioner’s sugar while warm.

When mum and I were peering into a show window of Cafe Walter Friedel, a man standing nearby turned and asked if we were Japanese.

‘They are Schneebälle, did you know?’ He smiled. He was a Japanese tourist and visiting the town which was a part of the package holiday. ‘We came by a tour bus. How did you two get here?’

He was very much surprised when I told him that I drove from London. His eyes twinkled with excitement. ‘Oh wow! Really? I’d love to drive on a world famous autobahn too!’, he gushed. Apparently, he loved fast cars and driving a car in general. He confided to us that a driving holiday in Europe, especially hiring a BMW in Germany and driving it on autobahn, was his lifelong dream.

Our conversation returned to the Schneebälle in the window, and we asked him if he tried them already. He replied yes and told us what he thought about them.

‘They were very sweet and rather greasy.’

Oh, I see. Mum and I looked at each other, thinking the same thing. Are they going to be as anticlimactic as Kendel Mint Cake or Grasmere Gingerbread?

Anyway, the man and we parted shortly afterward, wishing each other a safe journey home.

Next day, we did have a chance to explore the town, but we completely forgot about the pastries because our attention was all focused on the Rothenburg’s famed Christmas shops.

As I write this post, I have come across a German confectionary shop Walter Friedel, and they are happy to ship their Schneeball to anywhere in the world as long as the order is more than €18.00! I am going to ask Hubbie if he wants to try them. So watch this space…

2 thoughts on “Snowball in June”