Our carriage ride through a leafy path towards the castle was very pleasant and relaxing. Apart from a steady rhythm of the hoove kicking the tarmac and occasional murmuring by our fellow passengers, there was hardly any sound which reminded us the hustle and bustle we went through prior to the ride.
We alighted the carriage at where the road bulged out so a carriage could manoeuvre, and headed for a waiting area adjacent to a direct approach to the castle. The waiting area was equipped with benches, some of them were under the roof, electric noticeboards and a small kiosk for souvenirs and refreshments.

A view over the parapet… 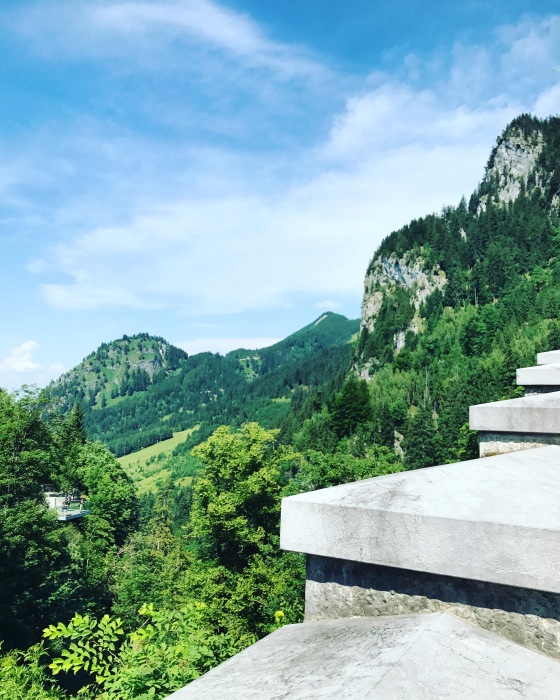 We had another 40 minutes to kill before our tour began so we started to read guide books, a short biography of Ludwig II and a book about the interior of the castle, together.

Eventually, “16:45” was displayed on the electric notice board, and we proceeded to the entrance.

Unfortunately, the main entrance was undergoing a major restoration work and it was completely hidden beneath scaffolding… 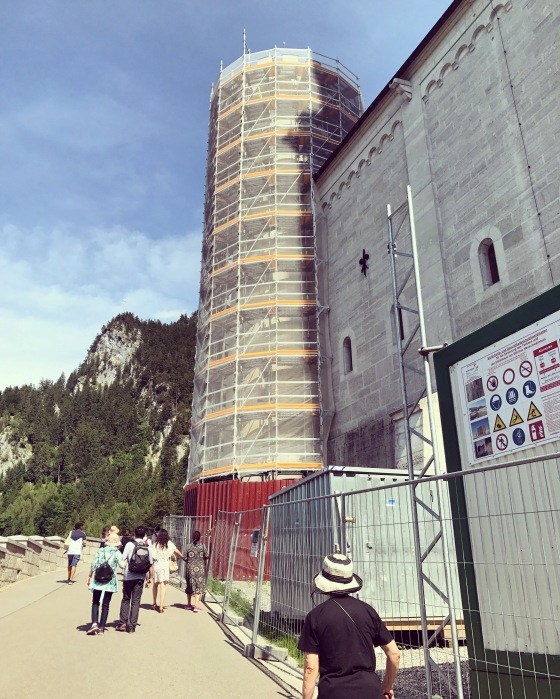 The work was very much needed for the castle to stay on this windswept cliff. However, it did spoil the view very much, therefore, I didn’t take many pictures of the castle’s exterior.

Photographing the inside of the castle was strictly forbidden, therefore, again I have no image to show here.

After going through automated ticketing gates with revolving bars and walking through a small courtyard, we entered an assembly point by the main entrance. In there, a small handheld audio device was distributed to each of us by the staff and we were herded up by a castle tour guide. Our tour guide was a very (very) handsome German guy and he spoke English with a slight German accent. He explained how the handheld device worked – it amplified the sound of his commentary which he would make through a small microphone so everyone in the group, no matter how far they were, would be able to hear it if the device was held close to one’s ear. He also warned us that strenuous stair-climbing would await us before we were treated with the extravaganza of Ludwig II’s medeaval fantasy. He explained it was because we were on level 2 and we were to skip entire level 3 before reaching to level 4 on which most of the highlights of the tour were located.

The stair-climbing he mentioned was certainly tough. Please heed my advice, anyone who may be thinking about visiting the castle. You must visit before being too OLD! Even though my mum managed to negotiate them with a walking stick and a handrail, it was a bit of an ordeal for her. Did the king himself climbed those steps? He must have done because it was the main staircase. Didn’t he find it a bit cumbersome? Maybe he didn’t have to move between different floors as often as his servants had to?

I didn’t count the steps but it felt like the stair would never end. Then, we arrived at level 4, the king’s floor. The first room we were ushered in was the throne room. The ceiling was high and it had a huge steel chandelier which resemble a crown. Symbolically, a space allocated for Ludwig’s throne was left empty because the king died before the castle was completed. What kind of chair would have been installed if the project was not abandoned, mum and I mused. Would it resemble the one in Westminster Abbey, a simple dark wooden one in gothic style? Or a bejewelled one which would compliment an opulent decor of the throne room?

Has any of the readers watched a documentary “The Fairytale Castles of King Ludwig II with Dan Cruickshank” which was aired on BBC4 during last May? The programme gave a fascinating insight into the king’s tragic circumstance and his motivation for building those fanciful castles. Obviously, the main problem was that Ludwig did not have the cunning and stomach to survive the turbulent period which swallowed up not only him and his kingdom but also the rest of Europe and beyond.

Even if he managed to stay alive until the castle was completed and the throne was installed, what sort of life would he have led? Would he be still very alone and melancholic? And what caused his death by Lake Starnberg?

His and Dr.Gudden’s death by the lake was shrouded in mystery, and it has been a subject of speculation and fascination ever since. Was he bumped or did he jump?

After the throne room, we were led to Ludwig’s dining room, followed by his bedroom. The rooms were dark, and if I may say so, gloomy. It was undeniable that a mood of melancholy was hanging in the air.

And, had I ever been any castle which had an indoor grotto? Never! It was until I visited Neuschwanstein, of course. Between his living room and study, there was a small grotto made from plaster and paint. The grotto was dark and felt slightly damp like the real one. Why he decided to have a man made grotto in there, I had no idea. I should have asked my guide, Mr.Adonis…

All in all the castle was beautiful. It was like a jewel box. One of a kind. Still, I found it hollow and tragic through and through. Poor Ludwig II, a powerless puppet king living in fantasy in self imposed exile. Probably, the castle was Ludwig’s oversized bravado against the outside world which was ruthless and ungratifying? 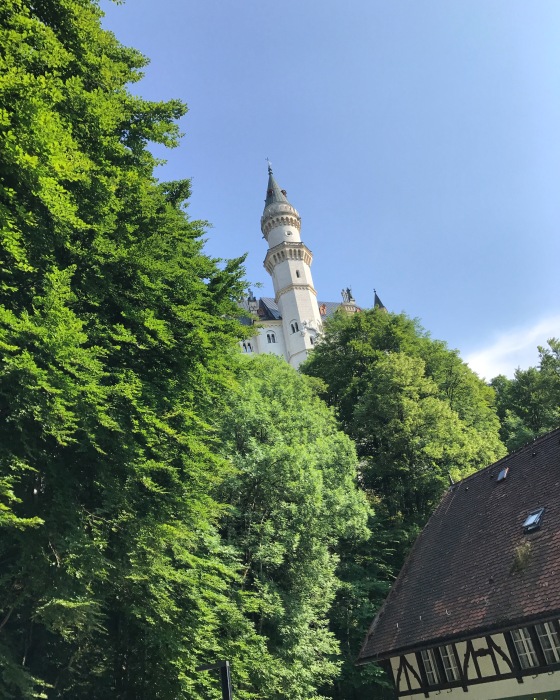 We left the castle and headed for a pick up point of horse carriage.

Hello there. Good to see you guys again… 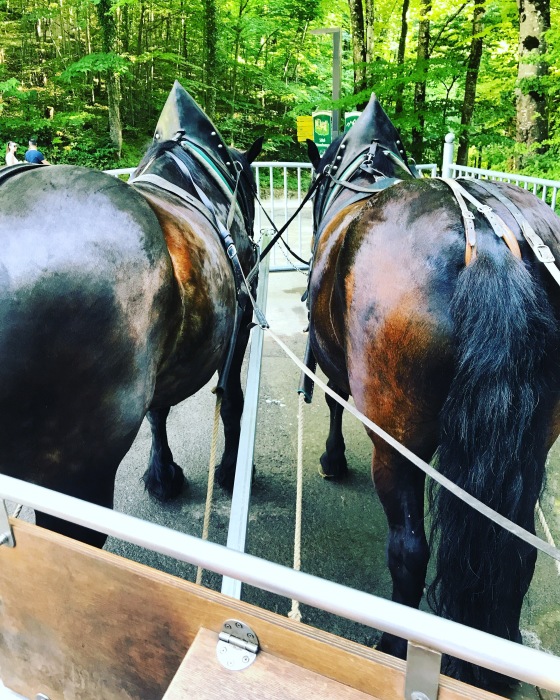 Descending was a lot easier for the horses. The driver made sure the carriage wouldn’t roll too fast by applying a foot brake time to time… 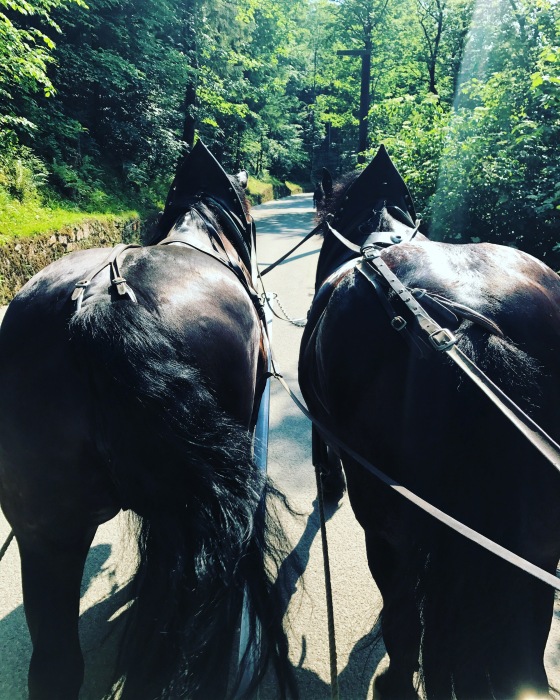 Join a carriage ride with us!