Unlike the previous day, the morning of our departure started with a downpour. Well, that explains why last night was very so sticky! We agreed as we packed our luggage.

Below our window, there were a group of weekend cyclists who were pondering what to do with the pouring rain.

We checked out shortly before 9 o’clock and steered our car towards Strasbourg.

My Google Maps estimated the distance from Salem to Strasbourg as 188km and the journey would take a little more than two and half hours.

However, the actual journey turned out to be not so straight forward… 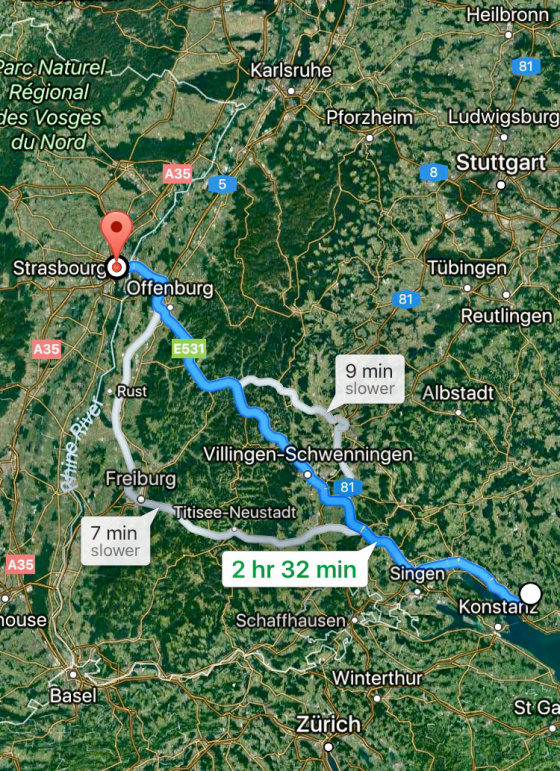 During our road trip, we always admired German style of doing things, like their automatically rotating toilet seats at their motorway services, efficient and cheap public transports, etc. However, we were not at all impressed with the way they managed their roadworks.

In Britain, any roadworks or events would be signed well in advance, and any associated traffic diversions would be clearly signposted too so drivers wouldn’t get confused or go astray.

I can’t remember exactly where, because I was in a state of panic, but somewhere between Hornberg and Gengenbach, there was a long tunnel going through underneath the mountainous region. Up until that point, we were making a good progress thanks to Google Maps, and feeling pretty optimistic. Then, we arrived at a traffic crossing and beyond it, we could see the opening of a tunnel. Once the light changed to green, the satnav directed me to cross over and head for the tunnel.

‘OMG, what’s going on here?!’ I saw a road block which was barring the entry and a red lamp was shining at the top of the entrance. Do you mean the tunnel is closed?! And where is an alternative route?! It was a dead end and I could do nothing other than a three-point turn.

For a while, we drove around like a headless chicken. The satnav didn’t understand why I was not following the navigation and kept on insisting on me to turn around and go back to the tunnel. ‘Oh, shut up!’ I cursed and scanned my horizon for any road sign indicating the alternative directions.

Then, we ended up on the street which seemed to be leading to a town, and the street was very crowded. It appeared that those behind the wheels were also in the same boat, lost and confused by the closure of the tunnel.

We sat behind the queue for a while, feeling let down by the nonchalant attitude of the German highway agency. Why didn’t they put up road signs? Not all the drivers were local and most of us rely on satnav nowadays. I never experienced anything like this in the UK or France. Aren’t you a bit careless, you German traffic control? We weren’t very pleased.

The town we drove through at snail pace was busy with the Saturday shopper’s. Some stretches of the street were cobbled instead of tarmacked, and rows of colourful bunting were stretched across the street lamps. We would have enjoyed the scenery and even been tempted to make a detour to have a coffee break if we weren’t so horribly lost.

After the town, we (and our fellow drivers) found ourselves near a large business park. What do we do next? Up until that point, I was still listening to Google Maps and following its navigation. ‘Mum, I have to ditch the satnav for now.’ I turned my iPhone off because I had a sinking feeling that it was directing us towards the useless tunnel again. As I made a U-turn, we saw a coach which was a few cars ahead of us making a U-turn in the forecourt of the petrol station. Oh god, no one knows where we are heading…

We decided to follow the traffic ahead of us, hoping if they were locals and knew the alternative route. But no, a bunch of us ended up at the mouth of another blocked up tunnel shortly afterward. And again, there was no road sign. We all scrambling to make a U-turn in haste, and the scene resembled the one from the cartoon, Wacky Races!

Those cars, which were thrown into disarray with us, were all German. What do they feel about being aboandoned like this? Where is the German efficiency?!

Again, I realised how lucky I was to have mum sitting next to me. She had been driving for a long time, and she knew how to get out of the sticky situations like this. ‘Look, that coach! You remember it was making a U-turn at the petrol station?’ She pointed at a blue coach which was about 80m ahead of us. Oh yeah, it was the same coach! She suggested that we should follow it because the coach driver may have known the area well and been travelling on the alternative route already. If the coach was a holiday charter kind, it may be heading towards Strasbourg as well! So we started to follow it. The tall body of the coach was easy to keep an eye on, and mum spread our reserve paper map on her lap and trailed our progress with her index finger. I felt very reassured.

Mum’s hunch was spot on! The coach did lead us to Strasbourg. And to our delight, we saw a “GB” badge plate which was displayed on the rear of the coach when we got closer to it as the traffic slowed down after crossing the French Border. At the exit toward Strasbourg city centre, the coach in shining armour did not come off E52 like we did, and it carried on towards Reims instead.

Thank you very much for helping us even though you had no idea that we were using you as a guiding beacon! We waved at the coach as it disappeared rapidly out of our sights.

Once again, Google Map was turned on, and we headed towards an underground car park in La place Gutenberg…

3 thoughts on “Lost in Germany”