One of the few joys I find during the Christmas period is to be able to watch classic children films, such as Walt Disney’s Pinocchio or Cinderella, first thing in the morning. Obviously, I am not a BBC’s intended pre-school viewer, yet, the programme lets me relive the delight of my early childhood in the hue of Instagram filters and I love the Christmas TV listings because of it.

Another object which inspires a pang of nostalgia is Britain’s iconic red phone boxes. Sadly, they are one of those endangered spices in the modern British street-scape which are fast disappearing due to the encroaching tide of modern technology such as mobile phones, WiFi and competing rival phone companies.
As universally recognisable red boxes with glass panes, which remind me of a musical box or a bird cage, recede from our view, the spots vacated are left empty, or worse, replaced by ugly nondescript industrial looking boxes in a shade of black or grey.
Even though I am one of those who have embraced a new life style offered by modern technology such as iPhone, and as the result, have directly contributed to the demise of the telephone kiosk, I am saddened by the disappearance of the red boxes which used to be dotted around London.

Then, I came across a delightful article in a copy of the Evening Standard the other day… 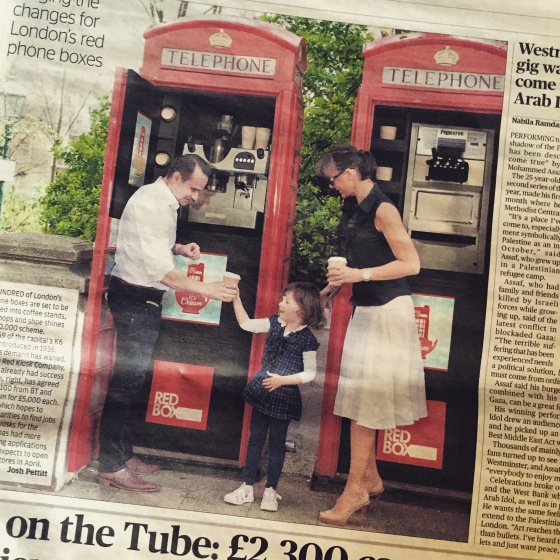 Some of the disused phone kiosks are to have a second lease of life by being converted to coffee stands, sweet shops and shoe shines! The Red Kiosk Company, who are behind this fantastic project, hope to work with charities for the unemployed for generating job opportunities as well as adding new “crowd magnets” on our streets.
There are more than 12 planning applications already approved by local authorities. Which means it will not be long before the beloved red kiosks reappear on our pavements to be a part of our daily life again. Yippee!!